Look for replays and levels and ask people's times.

It is 2022 October. 33wrtt project is alive and kicking for a decade! It all has started like that. Here are some key statistics for you fellow mans…

- Uphill Battle target was the same as Jarkko’s WR (19,79) during those days. Jarkko spent tremendous amount of time on this level and harldy anyone believed that 19,79 can be beaten. However, Zweq had too much free time on his hands and decided to give it a try. Congratulations to him, he succeeded and acomplished 19,76 (Table #397). In recent year Spef had some hoyling sessions to improve his time here. All in all, he got quite close to Zweq’s WR.

- Tunnel Terror target was set to 49,07. At that time WR was only slightly above the 50 second line. The end backward-bounce was deemed too hard to replicate in a hoyla mode. In 2017 (Table #389) Kazan blasted with 48,86. A run, to my eyeing, is really smooth and gracious. This may be too hard to improve even in 2028.
If we talk about the future endevours, I can mention that there were other kuskis, who had rare, but a little bit faster starts, compared with Kazan’s run. Also, bike movement after the end backward-bounce is not the best out there. Even though, I could not do better myself ever.

- The Steppes target was set to 10,59. In 2013 (Table #367), at the start of his career, Spef introduced himself with 10,50. I can even recall him saying that The Steppes is his baby. Probably, meaning that he will not ever let anyone other than him to hold this WR. These days, talli occasionally goes for some small hoyling sessions and is able to get 10,5x times. The same can be said about Spef. This, to me, appear to be suggesting that 10,4x is clearly possible. But will the be any motivation left in 2020’s?

- Hill Legend target was the same as Xiphias’s WR (13,88) during those days. Again Spef was the one who improved it in 2013 (Table #370) with 13,87. Later on, Bjenn did the same with his 13,86 (Table #390). I suppose, both improvements did not use any new moves. But… in 2019, while bene was still moderately active, some other approach to the second part of the level was invented. We are talking about the push from the ledge. If I remember correctly, keypresses are so tight that it is nearly impossible to get them in time. That’s what makes this time impressive.

- Labyrinth target was set to 52,95. At that time I had too little knowledge about the real possibility to fly into the tube directly. That is exactly what made this target off, if we look at it from the 10 year perspective. Mielz was the first who tied (Table #368) and later (Table #377) beat the target with his magical 52,76. Most of the scene probably went like – ‘whaaaaat?’. Then Kazan happened with his 52,36 (Table #386). Crazy time and crazy execution. Looking into the future, it is highly unprobable that a 51,xx time will happen. Mielz attempts to recover his WR shows exactly that. His recent 52,49 is said to have all parts decent, but not super fast. In other words – 0,05 better possible everywhere. Which puts us at 52,0x at best.

- Spiral target was set to 44,02. I happened to beat it just this year with 43,99 (Table #419). If we combine my best runs, we could get a 43,9low, which might realistically happen in a future. But at the moment, I am content with breaking the second barrier and coming back to the WR table.

- Ramp Frenzy target was set to 39,52. Back in the day it seemed like an impressive time, which could be achieved with flawless climb up using only two left volts. Last year Spef surprised most of us with his 39,21 (Table #416). My first thought – maybe he used a ceiling after the climb up. Chances are this approach will be used in the future for 38.mid. For me, current WR is a little bit mysterious, and I like it.

- Shelf Life target was set to 33,06. Again, Spef showed his brilliant, brilliant class with 32,92 (Table #386). Personally, I was very happy to see this time, because it is the last second break on this level even if we take into account the bounce-up shorcut, which is yet to be done.

- Pipe target was set to 28,54. Of course, we are talking about famous bounce. In 2019 Finman was the first one to tackle the target (Table #402). The run was genious. Imagine the skill level needed to manage the bounce, find the way to gather speed off the hang so it enables you to jump over the ledge into the cosy left corner. It is extremely difficult sequence to exercise. In 2020 Mielz found an alternative strategy to manage the bounce part a little faster. Building on this and on the fact that he was able to get a 2nd part of the level better than 97% of his saveload attempts, he achived 28,00 (Table #413). Truly remarkable, my friends.

- Steep Corner target was set to 42,20 and it was achieved precisely by Kazan in 2014 (Table #377). Nothing more to add, except for the fact Finman (who was also hoyling it for a record quite much) believes it is a pretty solid time. Also, Spef recent attempts to beat the WR, were futile. But for how long?

- Enduro target was set to 46,97. In 2015 Spef managed to achieve the goal with 46,96 (Table #382) using the new style – bounce just before the last apple. Chasing for the new prey in most different WRs statistics section Zweq got his first WR in Enduro with 46,76 (Table #418). The run uses more kuski-friendly approach to the bounce. Also, if I remember correctly, Zweq’s aspirations were as high as 46,6x, so in the future we might see some improvements. If only I can get bounces regularly

- Freefall target was the same mr’s WR – 11,46 back in the days. Later on, after bene revealed that pops were possible on this level, target was changed to 11,39. Bene got past the target in 2019 (Table #406) with 11,38. Later on, Spef got even better time – 11,37 (Table #414) after hours of immense hoyling. The level itself is so short and simple that finishing it every other attempt is unavoidable. I can only imagine a feeling, when you get a Best Time! display in such conditions. Pure joy.

- Enigma target was set to 19,13 with hopes that longstanding Stini’s WR will be beaten in a more bugless fashion. After plenty attemps, extraordinary fails and with invincible spirit Mielz achieved just as what was predicted – 19,13 (Table #407). Dedication only second to Nekit’s and a sixth sense for bounces allows Mielz to give us a glimpse of what has seemed an impossible task for over a decade.

- Tricks Abound target was set to 41,09 and boy how wrong I was with this. In 2019 Spef put the whole scene in awe, when he presented his 38,73 (Table #402). Slingshot of the highest order, the braveness of the heart, the faith in elasticity – everything was put in one place. What was seemed impossible, became reality. Biggest relative improvement in the new era of Elasto Mania.

3. Serpents Tale, Turnaround, Slalom and Framework targets were off only by 0,05 or less. All in all, it seems that the project itself was quite a good success.

But man, this does not feel right. Even though we had an amazing progress, there is still some way to go until the 33wrtt project is done. Therefore, I present you the ultimate and final target list. It assumes total time of 33:59,99. What is more, it takes into account the fact that some targets are more difficult than others (doh!). Hence, the Tier 1-3 rating system. 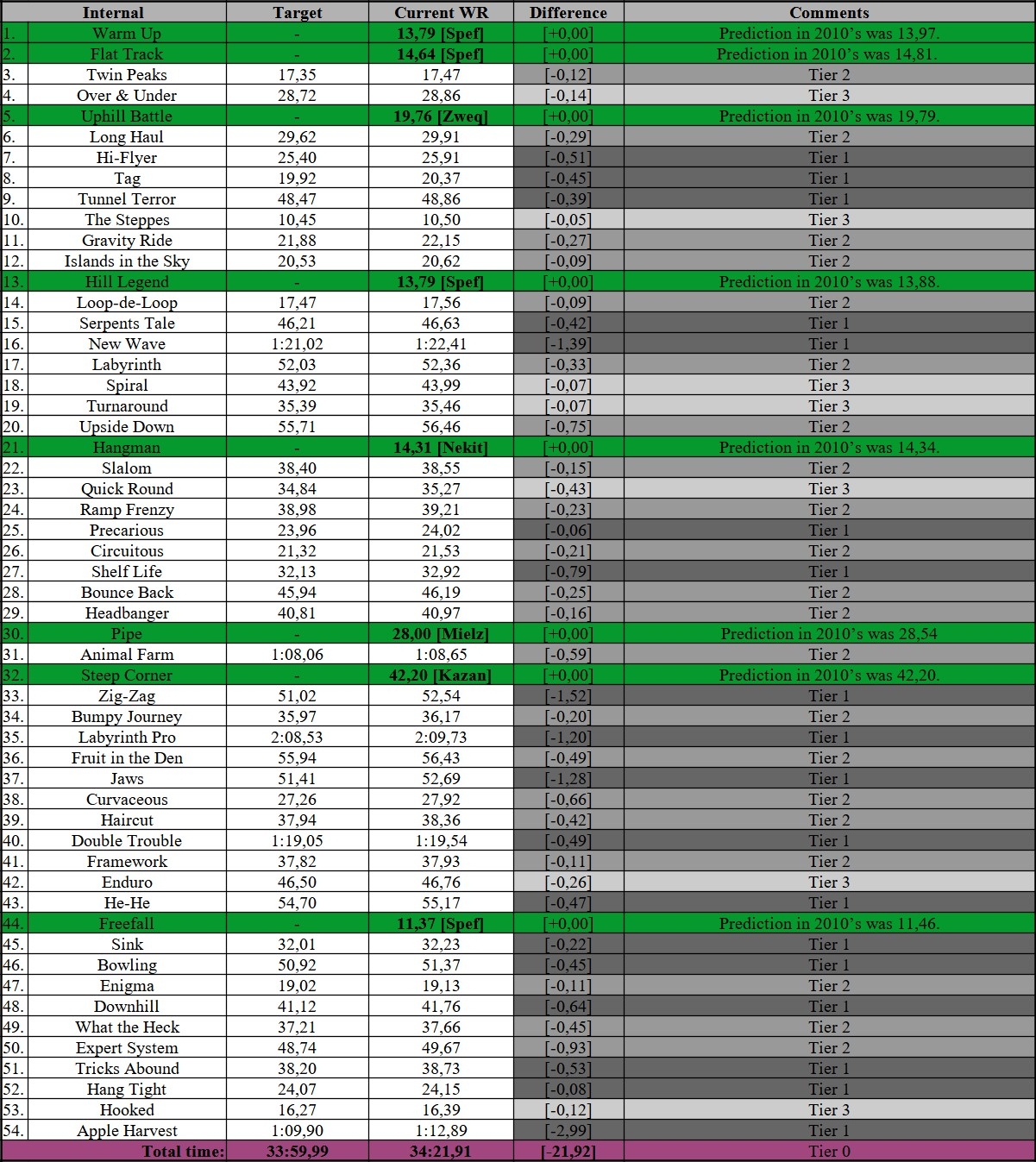 Also, when 33wrtt is achieved I will contribute 685 Eur. for the same purpose.
Of course, I am aware that these sums are an yoke for such tasks, thus I encourage you to put up your own bounties.

Great wrap up. I will forever be interested in the int insight of other players. It takes a lot of knowledge to beat them wrs and I rly appreciate sharing of that.

If a few days is a long time for wr höyl then yeah, I did it for a very long period of time. After that never seriously höyled it, only tried to find styles etc iirc, obviously not finding anything that works (well enough). But yeah it is a good time
... .. Pipe levels ... . ...Höylä levels .. ...
"Those who are heartless once cared too much."
Top
Post Reply
4 posts • Page 1 of 1

Return to “Replays and times”