I remember villej as nice guy. Dunno what happened to him.
Top

recsource gate
<Pawq> at a gym you have only 3 options: 1. have your eyes closed, 2. stare at yourself, 3. stare at others, all of which are either super boring or disgusting
Top

that just tells how little you know about anything, i never tried to hide my identity
Top

that just tells how little you know about anything, recsource has nothing to do with anything

now let's get back to topic
Top

if nobody knows anything about anything then why not just ban your phantoms everywhere?

some people do know and you clearly don't, perhaps that's the reason why im not banned
Top

silence peasant, i ban u

I think if nowadays you are allowed to choose your own pronouns and stuff then changing the nickname should also be respected. It feels like a similar part of a person's identity.
Top

Ppl tend to change their nicknames, but the way here normally isnt just making new accounts. They should write here about and it gets done, also can change it in eol if want. This way others see the change and everyone is happy. Giving ban for not doing it like "norm" way is not oke tho.
Team SPEED

i love everyone :*
Top

Not doing it like "norm" way in this case means creating phantom accounts, which automatically results for bans on the phantom accounts in all cases that I can recall, except ville_j's.

Interesting, i think mopolauta authority does its best and is reasonable, sometimes it is hard being in charge and you cannot please everyone. we probably just dont have the full story.

Sveinr or any other authority of mopolauta:
Does ville_j have two active forum accounts? If so were you aware of it?
could i also create a new forum account while also still retaining my old one?
If not and assuming that is the case for ville_j, why may he do so but i cannot?
God Bless America
Top

This is how i changed my nick:

danitah: do you use this nick anywhere else?
[23:53] danitah: there are some guidelines to changing nick, you should only change if intend to use the same in other places like lauta and chat rooms also
[0:02] danitah: are you going to use new nick for longer period?
[0:02] ROKKEBOL: i think so
[0:04] danitah: i'll accept it, make sure to tell people who you are when they ask etc
[0:04] ROKKEBOL: ofc, im not blaztek
[0:04] danitah:

As one of eolmods I can say what it looks like on the EOL front from my perspective:

Yes, ville_j and awsj, although the former is hardly active - no battles played since 2017, roughly when this (the linked post and the following two from vj) happened:
viewtopic.php?f=3&t=9284&p=258487#p258460
We've been aware (as have most people I guess) that awsj was vj virtually from the start, but given all the drama that took place before, I assumed that he did want to hide his identity and just keep playing the game without revealing who he is, so I didn't say anything in public unless someone asked explicitly. From my understanding, the phantom acc wasn't banned partly because of vj's status/contributions, and partly not to add to the drama.

The short answer is no, the phantom acc would be banned when discovered and your old/normal eol account would get a warning.


As much as I didn't (and don't) want to add to the drama and thought it was mostly OK if vj wanted to quietly play incognito, given his overall activity I think it's simply unfair towards the people who are not as active everywhere and therefore may've not figured out or not heard that it's all the same person, which is why I decided to post about it openly. And to be fair now, especially given that vj said he never intended to hide his identity, I'm beginning to question if he should really be exempt from the rule. But there are higher authorities in EOL.


I hope this explains something to some people. Just to underline once again if I haven't enough already - these are all my personal observations/opinions, and don't necessarily represent the opinions of the other eolmods.


PS: ROKKEBOL is the best example of how a nick change should take place. It's plain courtesy to keep consistent nicks throughout the various places in the scene, in order to make it easy for everyone to identify you and to avoid confusion, especially of the less active members. Of course nick changes happen, because now and then we may want to alter our internet identities, but they should (and in most cases are) be consistent and well-announced, in order to help the whole community. That's the very purpose of this topic (or so I presumed).

edit: actually never teh fuk mind, why do i care
then again i don't know anything
maybe easier not to think abouut alöl things thought than not things thought ... or something..=?
Top

pawq wrote: ↑
15 Feb 2021, 11:07
It's plain courtesy to keep consistent nicks throughout the various places in the scene. 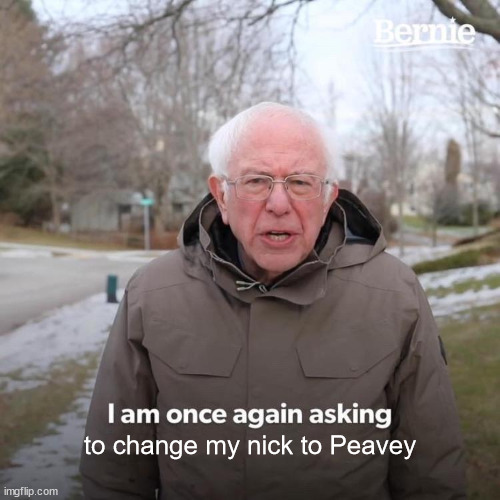